Welcome to Films on the Fly

Welcome to Films on the Fly. Films on the Fly, WAS  an Australian startup trying to foster paradigm shifts in Entertainment as well as Education and do so in an economically responsible manner. The company however had some difficulties and is no longer running ( something like 90% of all startups fail, this was but another for the statistic ). The company has been disbanded and the rest of the content on this site is for archive only. We are doing this by championing the Multipath Interactive Storytelling concept and promoting Collaborative Communities . The video below will help explain Multipath Storytelling, which is like those old choose-your-own-adventure storybooks, but as online video and expanded to include collaborative communities. We are also available for general film and web development work to keep us afloat until the Multipath platform has been launched. We are based in Adelaide, South Australia and have good links with the local film communities and other production companies.   If you are interested in doing something innovative then please give us a buzz.

Just thought we’d touch base and let everyone know that Films on the Fly has been busy working on a few new exciting projects and proposals.

We are writing up a webisode proposal, are putting together some ideas for changing the way the education department thinks about collaborative, interactive video and have a couple of other possible projects that are too early to discuss at the moment.

In the mean time we’ve been doing work on the web platform and have been working on some back end code to help dynamically update the relationship links between videos. Hopefully with a few good days of programming we’ll be ready to do a soft launch of the new Link website. 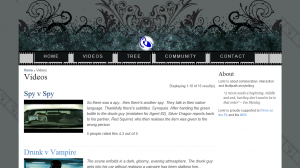 For those who were unable to attend the Linkr Screening at the Mercury Cinema, here’s a simple, default example of a tree view.  Note that there’s a number of view configurations the film relationships can be viewed with. Also, we were experimenting with the data and I’ve just realised that we changed the link relationships, so this isn’t an accurate representation of the actual film tree. 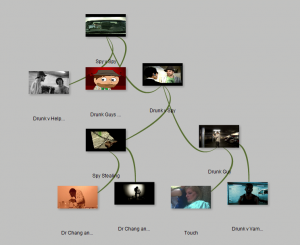 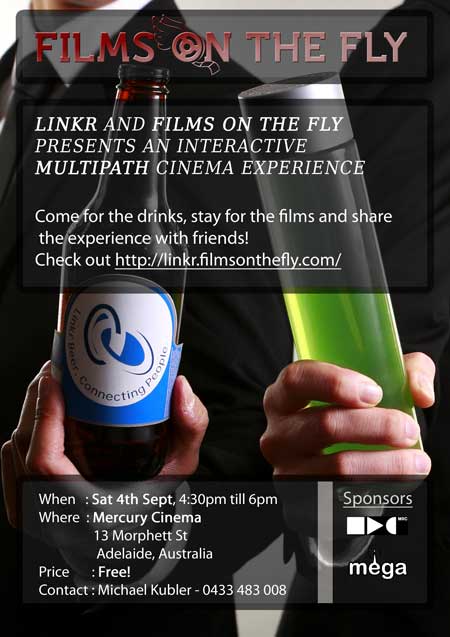 On the 4th of September you can do all three!
At the Mercury cinema, Films on the Fly will be screening the Linkr multipath film content and launching an all new interactive, online, video sharing platform.
With the support of the MRC, and the financial backing of mega, we have created a number of short Multipath films.
Starting off with a drunk guy walking home you can watch him get saved by a friend or embroiled in a covert spy operation. You can watch a vampire get run over or in a completely different film tree you can see competing breakup agencies.

As a bonus we’ve put down a bar tab. So come for the free drinks, stay for the videos and don’t forget to share the experience with your friends.

Check out this cool fan made teaser.
It’s a compilation of footage from the Feb 2010 workshop content

Watch on You Tube

Hi,
We are looking for someone who wants to help change the world.
Films on the Fly is developing an online, interactive video platform which will change the way people think about films. It will change the way people make them and how they experience them.
Remember those old choose your own adventure books? Think of that, but as online video and expand the concept even further. We call it Multipath storytelling and it’s engaging.

Films on the Fly is about working for the better. For the a better environment, a better world and the betterment of humanity.

We are currently looking for a part time PHP programmer, someone that has an interest in database design and is familiar with MVC and OO.
Extra points if you’ve already used the Yii framework and a triple point score if you’ve setup a cloud computing app on Amazon EC2 or have an interest in doing so.  Don’t worry if you haven’t. If you are interested in autonomy, mastery and purpose then we want you.

Autonomy : Films on the Fly is a flexible company. We want you to work when is best for you and in the most convenient location. You can work at our office in the Adelaide CBD, or even from home. Although you will need to be available for scrum meetings and easily available online.

Mastery : No matter what your programming proficiency there will always be interesting and rewarding challenges. Together we will learn and grow, allowing us to reach even greater heights and more fascinating problems to solve.

Purpose : Did I mention we are interested in changing the way people think about and view interactive media and will be having fun making the world a better place whilst doing so?

The position is initially for 3-4 days a week, for 17 weeks, but we hope that as you help the platform and company evolve and grow, the position grow and evolve into a full time position.  The job  starts in June (2010).

If you are interested then please email fun@filmsonthefly.com, check out our website or call 0433 483 008. Extra kudos if your a Film maker or artist, Michael, John and Sunny are, and we look forward to hearing from you.

PS : If your a Flash scripter, web designer, data visualisation artist, or film maker then let us know, we’ll be recruiting for such positions in the future.
—
www.filmsonthefly.com
The Films on the Fly team : Michael, John and Sunny
“Do well with nothing, do better with little, but most of all, do it now” — Kino

Films on the Fly’s Aims and Principles

Defining a companies aims and goals are never easy. The wrong goals can have disastrous effects. As Dan Pink writes in his book Drive, Goals should came with a warning label. “Goals may cause systematic problems for organisations due to norrow focus, unethical behavior, increased risk taking, decreased cooperation, and decreased intrinsic motivation. Use care when applying goals in your organisation.
For those not aware of Dan’s work, check out his TED talk on the Surprising Science of Motivation, an amazing talk which brings home what the likes of Google’s 20% time, and Netflix’s presentation on their Corporate Culture are about. Intrinsic Motivation.
The founders of Films on the Fly, John, Michael and Sunny all want to make the world a better place and hope to work with people who share our passion. We also believe that engaging, interactive video can be used as a catalyst for social change. What better way to change the world than by creating a platform which can be such a catalyst.
To better explain our ideas we have created some company aims and principles.
Films on the Fly‘s main aims and principles are :
Films on the Fly sees itself as a ‘for-benefit’ company where the profit-maximisation principal has been augmented with the social-benefit principle. Similar to the idea of an L3C (low-profit limited liability) company, we favour long-term value and social impact instead of short-term economic gain. We aren’t adverse to making money, but we want to make sure that cutting corners now won’t cause catastrophic issues in the future. Examples of companies who have done this include Enron and their accounting practices, Ford creating the health hazard known as the Pinto, and Sears car repair staff trying to meet sales quota’s, so doing unnecessary repair work, ultimately undermining customer relations and long term profits.
One way of putting these concepts into practice is to adjust the way we value things.
In the current monetary system products and services are generally valued according to the scarcity (supply/demand), and human labour required to create it, with a single focus on maximising profits. This was fine 150 years ago when energy was mostly derived from slavery instead of oil and we didn’t have the power of the Internet to expose companies rights and wrongs on such a large scale. When considering the costs of a product or service Films on the Fly likes to include the costs of human well-being and the environment into the equation. For example, whilst the monetary system may value the costs of outsourced child labour very low, because of the damage to human well being we see it as a being more expensive than a normally paid adult worker in Australia. Although if possible we  prefer to replace monotonous, repetitive tasks with automated systems or change the design so it does not require such a boring job in the first place.
The cost of a coal fired powerplant might be cheaper in the short term in the current monetary system, but in the long term the smoke and increased environmental destruction is simply not worth it when clean, renewable energy sources like solar and wind are available.
Also, coming from Adelaide we prefer to increase the size of the pie rather than our percentage of it. It is better to be best company in a $500 million industry, than the only company in a $10,000 industry.
The interesting bit for our financing team will be trying to run an internal for-benefit economic model within the current monetary system. It will take some time to find out the true costs of products and services and we will likely try out various algorithms and weightings, but we hope that other companies will follow our lead and choose the smarter long term choices, which ultimately lead to greater profitability for everyone.
If you have any ideas or suggestions regarding this, please comment below or email contact@filmsonthefly.com

Films on the Fly's latest tweets